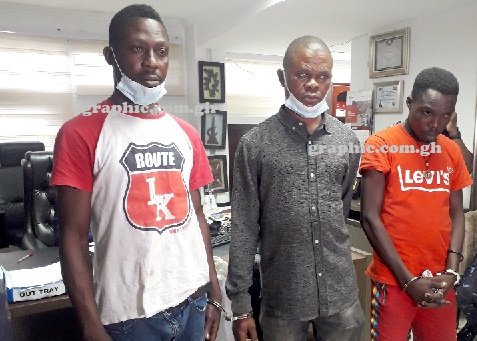 The Customs Division of the Ghana Revenue Authority (GRA) has intercepted 3,229.4 grammes of a substance suspected to be cocaine on a commercial passenger vehicle at Dabala Junction, near Sogakope, in the Volta Region.

Three suspects were arrested. They are Eric Alorbu and Amegavi Agbeko, the driver and conductor of the vehicle respectively, both Ghanaians, and Uche-Nna Endurance, a Nigerian passenger on the vehicle who claimed ownership of two bags in which the compressed slabs of the suspected narcotics and a number of cosmetic products were found

They were on a Ford Transit bus with registration number GT 6348-18 from Aflao to Accra.

Customs officials could not give the estimated value of the drugs.

However, checks by the Daily Graphic revealed that in some parts of Europe the street price of a gramme of cocaine is $178.

Briefing journalists yesterday, the Commissioner of Customs, Col. Kwadwo Damoah (Rtd), said the suspects were arrested during the usual routine checks by Customs officers at the Dabala Junction, at about 11:30 a.m. last Tuesday.

“The officers noticed the two bags and it looked suspicious. When they searched them they found three compressed slabs of substances suspected to be narcotics.” he said.

He said the Customs Division would continue to ensure such substances which were hazardous to human health and a danger to public safety were not brought through the various entry points of the country.

He said the suspects and the items would be handed over to the Narcotics Control Commission.

The Deputy Commissioner in-charge of Prevention at the Customs Division of the GRA, Mr Emmanuel Owusu-Boakye, said when the three persons were arrested they were taken to the Aflao Customs Sector Command.

At Aflao, a joint team comprising personnel from the National Investigations Bureau, Narcotics Control Commission, Defence Intelligence and the National Security led by the Customs Division, was constituted to conduct preliminary investigations on the suspects and the items.

The compressed whitish substance, the various cosmetic products and some capsules were subjected to thorough examination with the Narcotics Control Commission weighing the content of the substances using the United Nations Drug Test Kit.

Mr Owusu-Boakye said preliminary tests of the three compressed slabs proved there were traces of cocaine in them and they weighed a total of 3,229.4 grammes.

However, when the cosmetic products were tested no traces of cocaine or narcotic were found in them.

Be a Citizen and not a Spectator