President Nana Addo Dankwa Akufo-Addo has said his promise to ensure a bridge is constructed over River Oti remains valid and will be fulfilled.

The President renewed the pledge in a message to the Chiefs and opinion leaders from the area.

Akufo-Addo had in 2019 promised a durbar of Chiefs and people of Dambai in the Oti Region while on a three-day tour of the Oti and Volta Regions.

He said, his government was ready to put a bridge over the Oti River to connect Krachi East Municipality with Nchumuru District.

Further, the President announced to the gathering that the feasibility studies have been completed by FDN Group and that the financial terms of the project were being examined by the Ministry of Finance. He said the Roads Ministry is anxiously waiting for a ‘no objection letter’ from the Finance Ministry.

But the project failed to take off as scheduled for lack of commitment from the Ministry of Finance and Economic Planning.

FDN Group, a Dutch Company was selected to be awarded the contract in July 2019, is yet to move equipment to the site.

President Akufo-Addo has reassured Chiefs from Dambai, Krachi and Nchumuru areas that he is committed to ensuring that the bridge is constructed in this last term of his administration before he leaves office.

He said, “Oti bridge, for the Oti bridge, I am determined, I made the promise and I am going to see to it that it is done. If you talk about legacy, I want the Oti bridge to be my legacy project.”

The project was captured in government’s recent mid-year budget review presented to Parliament by the Finance Minister, Ken Ofori-Attah.

President Akufo-Addo also urged the people of the region to continue to support government in its resolve to deliver on its mandate.

The Oti bridge when constructed would facilitate the transport of food and movement of people across the lake and would be an easy route that would connect the Northern region to the Southern part of the country through the Eastern corridor.

The Hidden Truth on Homework 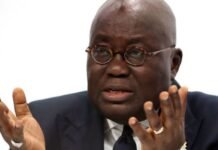