It may be difficult to convince victims of recurring rainstorm and flood disasters in the northern part of Alajo that water has no enemy. To some of them, the gathering of clouds portends danger and sends shivers down their spines as they are often displaced by heavy downpour.

Some Residents of Alajo North in the Ayawaso Sub metro in the Greater Accra Region, were over the weekend thrown into serious agony following the flood that ravaged the area on Friday, destroying property worth millions of cedis as a result of a heavy downpour in most parts of Accra.

The flood was reported to have sacked more than 100 residents, destroyed home appliances among other things. Some belongings of the victims were still trapped in the flood when our reporter visited the area, as residents struggled to save their wards from drowning.

Youths of the community were mobilized to avert extreme damage as many of them were seen scooping water from houses.

One of the victims, Samuel Opoku told The Hawk News that not less than twenty houses were affected. He attributed the flooding to lack of proper drainage system and tracing the source of their woes to Abelemkpe, an adjourning community.

He alleged that a contractor who had worked on the drainage system in Abelemkpe had directed the water to North Alajo rather than the main gutter, as that has occasioned their present blues.

He said though, no life was lost, some household appliances were destroyed by the flood.

“The flood came to us unexpected, as we were not expecting any flood this year. Though the area is flood-prone due to the running water to the area from Abelemkpe. We have lodged several complaints, but nothing has been done yet.

“The damage it has caused in the community is so much. It is one of the biggest flooding we have experienced in recent times. The flood affected mostly the people living along and around the St. Catherine School, in North Alajo here’. He narrated.

“Many houses and business centers along the area were not spared as many of them suffered great losses. If we quantify the damage, it would be running into millions of Cedis,” he said.

Another victim, Samuel Smith said, “the flood displaced many families. Take a look at those houses, the level of water in the houses, you can observe that the shop has been submerged.

“People are making frantic efforts to save their property. I don’t think anyone will sleep in the houses along this road to avoid further danger.

“A lasting solution should be found as the flood poses danger to us as a people.”

“We, therefore, urge the Assembly and government to come to our aide.” 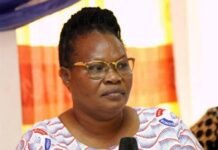