The Electoral Commission of Ghana, EC, has been urged to step aside all levels of collation and compute the results from the 38,000 polling stations to declare the actual results of the 2020 general elections.

The EC at a press conference last week declared President Akufo-Addo as President-elect of the general elections held on December 7, 2020.

The National Democratic Congress (NDC) says the election is flawed and for that matter will not accept the Presidential result.

The Voter Protection Alliance at a Press Conference in Accra on Tuesday indicated that it believes the election was rigged in favour of the incumbent.

The group is demanding the EC to give clarity to the figures given by computing all the results of the various polling stations.

“That is why we demand that all the various layers of collations be set aside, and the results of all 38,000 polling stations computed and declared as the actual and true results of the 2020 elections,” Mensah Thompson who is Executive Member of VPA said at the press conference.

Read the full speech read by Mensah Thompson at Tuesday’s press conference below:

Ladies and Gentlemen of the Press, we have invited you here this afternoon as a major stakeholder in Ghana’s Democratic process and the fourth estate of the realms to inform you about and the good people of Ghana about our utmost displeasure and discontent in what happened at the just ended General Elections on December 7th.

Ladies and Gentlemen, the Voter Protection Alliance is a coalition of Civil Activists Media Activists and other well-meaning Ghanaians who all have the common interest in protecting the Electoral sanctity and the democracy of this Country.

It is in pursuance of this agenda that today we have call on you to raise certain critical issues which we believe marred the entire credibility of the just ended elections.

As a young democratic state, we believe that if these anomalies if NOT properly addressed to the latter would set a dangerous precedent that would gradually erode the democratic gains of this Country and set us on the path of anarchy and chaos.

Here are our key observations….

This led to the killing of 5 people across the Country, leaving over 70 people maimed.

The answer is that, this can only happen when a well-structured infrastructure has been put in place to intercept results, temper with it before transferring them to the National Center in Accra.

Ladies and Gentlemen, State Power is Power of the People from the People, the worst thing any Government can use State Power for is to torment, harm or oppress the very people whom the powers emanated from.

The Fundamentals of Nursing Theories about Stress Revealed 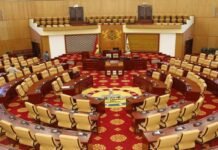