According to him, the New Patriotic Party (NPP) has been reluctant in developing the regions which is the stronghold of the party because they have realized whether they develop the area or not, Asante people will vote for them.

Mr. John Mahama also argued that the votes the NPP gets from Ashanti Region do not correspond to the developmental projects they have had under the party.

“He (Akufo Addo) should show us just one project in the Ashanti Region after four years. In English, it is said they have taken you (Asantes) for granted even if we do not do anything for them, they (Asantes) will still vote for us. Today the world is changing; it is no more the same situation. Everyone is measuring what you have done to make a decision on voting. So, check your living and vote for good”.   Flagbearer of the NDC Mr. John Dramami Mahama said this in an address during his campaign tour in the Ashanti Region ahead of the 2020 elections.

Meanwhile, the NPP on the other hand has said it has done tremendously well in the region counting over 2,000 projects across.

But Mr. Mahama in responding to the claim by the NPP quizzed “when he (Akufo Addo) came he said we have done two thousand and seven hundred and something projects, but where are the projects? We NDC do not count toilet facilities as part of our projects, because the toilet is the job of the District Assemblies”.

He also chided the NPP for counting toilet facilities and other minor ones as part of their achievement because those are the core responsibility of District Assemblies.

“When we talk of developmental projects, we talk about good things that improve standards of living of the people something like bigger hospitals, building a new secondary school, building roads somewhere, or building interchanges or bigger market”. Former President John Mahama said. 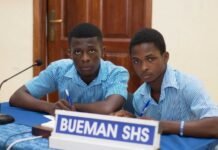