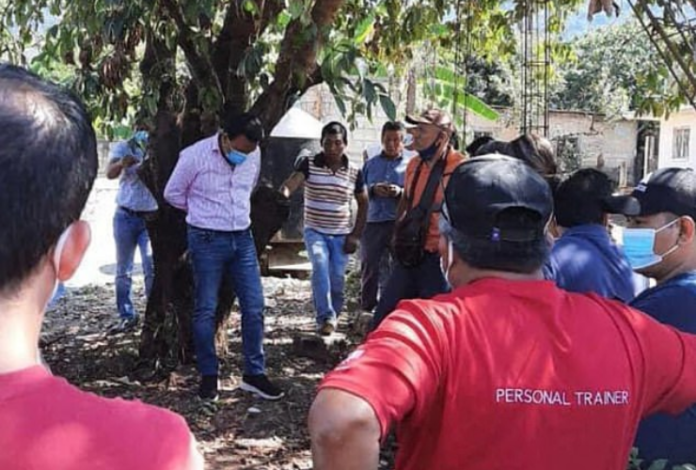 Politicians failing to fulfill their promised is definitely nothing new. At best, what the people can do is to reject him by simply not voting for them in the next elections. But these angry residents of a Southern Mexican state took matters into their own hands and tied a mayor to a tree.

Mayor Oscar Romirez was presenting his series of public projects for the residents of the city of Frontera Comalapa in the state of Chiapas.

Improvements to the water system was among his campaign promises.

At a meeting with representatives from the town’s communities, Ramirez was questioned about the poor state of the water system after he unveiled a new water tank. They alleged that the tank was broken down and had holes that were just patched up using cement.

One of the Community leaders climbed down the tank and scrapped the surface to show how it was covered with cement to keep water from leaking out.

A resident said; ‘He promised us a decent work, but it was a sham because the water system is not working well.’

‘It is a long-standing problem that must be dealt with properly and that must be a priority in this term because he came to see us in our houses with that promise and now, he does not want to comply.’

It was reported that the neighborhoods in Frontera Comalapa, which is a rural city that sits across the border from Guatemala, did not have water supply for a week.

The representatives then forced the Mayor to stand beside a tree, where he was tied with his hands behind his back. He was photographed in this condition and he was wearing a face mask.

But Ramerez denied that he was tied to the tree despite the photos uploaded online. He spoke in avideo  rying to downplay the incident.

‘They did not tie me down. The meeting was with eleven representatives of neighborhoods of the Municipal seat of Comalapa to agree on details of a high-impact work, the introduction of drinking water’ the mayor said.