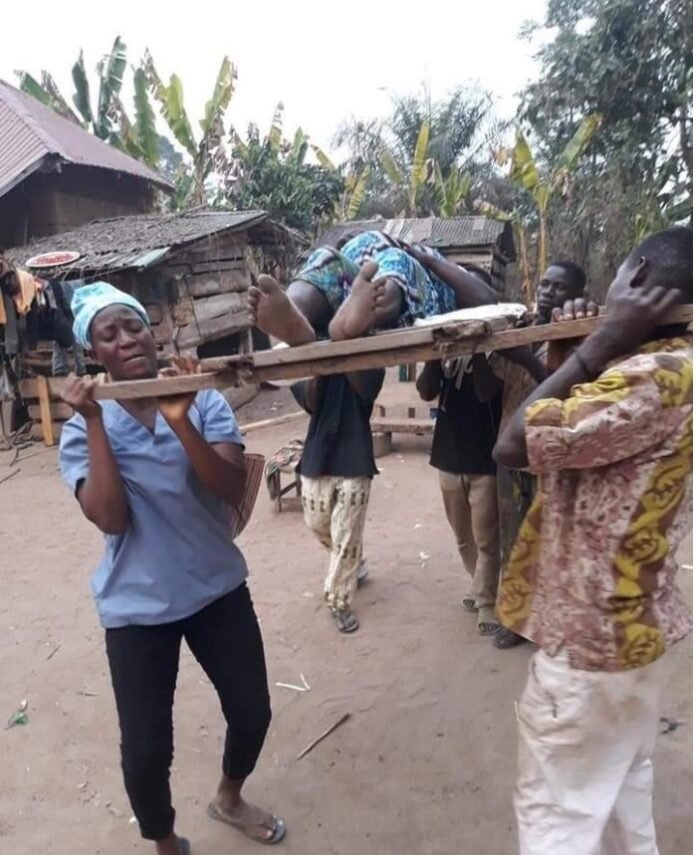 A heavily pregnant woman in labour at Effiduase Motokrodua village in the Sekyere East District of the Ashanti Region who needed urgent attention could only be transported on the head with a wooden door from her home to the nearest CHPS Compound to enable her deliver like tilapia up for sale.

The Midwife stationed at the Motokrodua CHPs Compound was identified as Rosemary Delali Gavoh.

According to Raymond Ablorh, Delali is amont the four health workers assigned to the CHPS Compound.  He said, the four are a gentleman and three women who are supposed to share one single room.

For Delali, even though her CHPS Compound lacks electricity, water and accommodation, her urgent need would be a poly tank to store some water for the facility.

Raymond reports that she (Delali) was forces by circumstances to self-financed installation of solar power for the facility.

The distance between the home of the woman and the CHPS compound is an hour journey on foot, Raymond Abloh (President Abloh) posted on his facebook timeline.

The husband of the woman who could not carry the wife reported the condition to the midwife.

After listening to him, Delali said she then decided to go to the house with the man on foot to take care of the woman.

Upon reaching the home, the condition had deteriorated because she had drunk locally prepared concoction.

With no vehicle around, she suggested that the door to the room be broken for her lie on it to be transported to the center for treatment.

Lo and behold, they managed to carry her to the facility and after several minutes of medical care, the woman delivered successfully, Delali added.

“We were approached by a man who said his wife was in labour but could not walk to the facility to deliver. So, I accompanied him to the house, it was quite a distance, about an hour walk.

“Upon reaching the house and after assessment, I noticed that the woman was finding it difficult to breath. She told me she took in some locally prepared concoctions to enable her deliver quickly but started experiencing strange feelings in the body after drinking it.

“I didn’t have all the required equipment with me there to take care of her so I instructed that we transported her to the CHIPS compound. But there was no car.

“So, we had to pull down the door for her to lie on it to be carried to the facility for attention,” Raymond narrated.

A working clinic for the people of the Sekyere East District and several other areas in the country will go a long way to alleviate their plights and provide a better alternative for their healthcare needs.

It’s undeserving for a woman in labour to be carried on wooden pallet. For psychological and other reasons, women in labour are usually treated with care and dignity due to the pain of pregnancy and childbirth.

Ampofo ‘begs’ Abodakpi et’al, says ‘We won’t leave anyone behind’