Majority Leader Osei Kyei-Mensah-Bonsu has revealed Secretary to the President, Nana Asante Bediatuo unilaterally wrote the letter cutting down budget estimates for the judiciary and legislature.

Speaker of Parliament, Alban Sumana Bagbin recently warned he will block the approval of the 2021 budget and economic policy of the government if the Executive maintains its decision.

However, President Akufo-Addo in a letter to Parliament announced that the budget for the Legislature will be slashed by ¢119 million whilst that of the Judiciary will go down by ¢77 million.

Speaking to JoyNews in an interview, the Majority Leader said the Secretary to the President wrote the letter even though the matter had not been conclusively dealt with.

According to him, talks were temporarily truncated when the President left the country for Ivory Coast some weeks ago.

But “on account of what had been happening earlier, the Secretary wrote the letter.”

“I think it’s a yesterday issue, but we have agreed that the proper thing should be done,” he further said.

Member of Parliament for Ho West Emmanuel Bedzrah is calling for a probe into circumstances leading to Nana Asante Bediatuo writing a letter to Parliament without the full backing of the President. 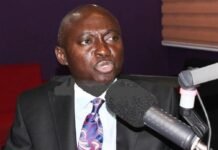