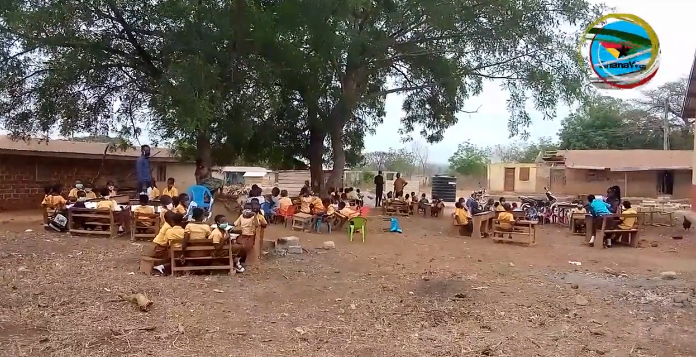 Pupils of Ampenkro/Asratoa M/A Primary School in the Jaman South Municipality of the Bono Region have been forced to study under trees due to the unavailability of classrooms.

The pupils numbering over 160 have classes under trees on the school’s compound as the school building built in the 1960s has become a death trap, a situation that does not promote effective teaching and learning.

A visit to the school by GhanaWeb depicted the unfortunate situation both teachers and pupils have to endure during teaching and learning.

Although teachers at the school refused to speak to our reporter, it was realized that aside from the interference from passers-by, pupils also had to battle with the direct effect of the sun.

Strangely, a newly constructed six-unit classroom block built for the community is under lock and key as the contractor, Henry Yaw Afful (Henforo) says he is awaiting the certification of the building by a consultant before he could hand it over to the community.

But the action by the contractor has come under a barrage of criticism from residents of both Ampenkro and Asratoa.

The Assembly Member for the Tekese Electoral Area, Clement Adjei who is unhappy with the situation told GhanaWeb that he is surprised with the conduct of the contractor as the community contributed in diverse ways towards the timely completion of the project only to be stabbed in the back.

Clement Adjei condemned the red-tape in relation to the project that is denying the pupils the right to study in a befitting and conducive atmosphere and appealed to the government to as a matter of urgency order the reopening of the classrooms for use by pupils to serve the intended educational purpose it was built for.

“We have been appealing to a new classroom for a long time. As you can see, the old classrooms have become a death trap so this project came as a big relief to us. But as you can see, the project has been completed but it has been locked up by the contractor. The pupils were using it, but he came and locked it up, forcing the pupils to study under trees. It is a sad situation for pupils to study under trees in this era and so I am appealing to the government to order the reopening of the classrooms”.

Nana Kwame Sekyere II, the Chief of Asratoa who shared similar sentiments appealed to the government to intervene by calling the contractor to order as the pupils cannot study under trees as it will negatively affect their future.