A Research and Advocacy political splinter group, Save NPP Now, has raised alarm over alleged funding of some National aspirants of the opposition National Democratic Congress (NDC) by the Warlords of governing New Patriotic Party (NPP) in variance to working to resource the grassroots of the party.

He said, rather than working to better conditions of Serial Callers, Polling Station Officers, Constituency Executives and other wings of the party, the appointees are wantonly dissipating cash on NDC’s national officers’ aspirants to the detriment of hungry foot soldiers of the elephant fraternity.

‘At this point in governance, all appointees of the president should not only be working for the government but must be seen fighting for the survival of teeming hungry youth’. Baa told The Hawk Newspaper.

For the ferocious Baah, the leadership of the New Patriotic Party needs to refrain from its misplaced priority adventures.

In an exclusive interview with THE HAWKNEWSPAPER in Accra on Saturday its National Coordinator, Daniel Baah Acheamfour, alerted that the ruling party has decided to Hijack the NDC through the installation of a puppet National Officers who will pose no threat to the NPP in 2020 general elections at the blind eye of president Nana Addo Dankwa Akufo-Addo.

“We want to alert NDC members countrywide that some national aspirants of the party are been heavily funded with looted money mobilized by some appointees of President Akufo-Addo ahead of their next National Delegates Congress. We have inside reports that the plot is to bankroll puppets executives and stop   independent minded aspirants from clinching the leadership of the party.

“Everybody knows that Volta Region is an NDC stronghold where a section of the NPP is actively collaborating with the NDC. That faction is the link between the NPP and identified aspirants who are broke and depend on government funding for their campaigns.

“The plot is to stop well rounded aspirants through campaign of calumny in favour of weak-minded aspirants heavily bankrolled by the NPP. The NDC delegates should wake up and resist this plot at all cost to salvage the soul of their party.

The group called on NDC delegates to open their eyes and prevent the NPP and their agents from taken over the party, adding “they must rise up and act now by electing competent men and women devoid of tribal sentiments.

“If they fail to act, pro-NPP, aficionados of Akufo-Addo would take over the party through the backdoor. They must not allow this to happen. Let them open their eyes. NPP and their allies within NDC should not regain consciousness after the upcoming congress”, the group prayed. 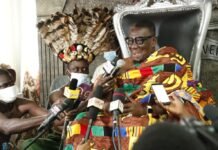