The Bible says in proverbs 29:18 that “where there are no visions the people perish.” This declaration is very true for a generation that has succumbed to unbelievable levels of mediocrity that sings and dances for MM/DCES, Members of Parliament and Presidents who build a few roads and then endlessly justify all the other failings of government.

There are now large agents of mediocrity across Ghana who have made a career from justifying the inexcusable failure of the past and present governments at all levels and count some mediocre projects as achievements even after some sixty-three (63) of independence; Ghana is a certified failed country in spite of abundant human and material resources.

The phenomenon of mediocrity is not new, it has been with us for a considerable length of time; what is new however, is the extent to which the culture of mediocrity has been consolidated across the Ghanaian society with large sections of the population becoming the defenders and justifiers of the mediocrity of government and opposition parties. This is Ghana, where a sector minister can confidently tell the media that 250k can’t build any meaningful dam. This is where one will need a million dollars to be able to control humankind-Vicky Hamma on my mind, not 1809 where one could only boost of his riches by the limitless number of wives, as well as male children to mound yam mounds. We live in the 21st century, an era that has heralded the most advanced technology ever known to man. From the internet to face book, YouTube to twitter, solar energy to wind energy, GPS to space tourism, the world is navigating through revolutionary technology in all spheres at a dizzying pace. Technology brings with it possibilities and solutions for all kinds of human challenges, it takes away the constraint and arduous task of needing to “reinvent the wheel,”  yet in the age and midst of such possibilities, Ghana has regressed into a failed state lacking the most basic infrastructure.

Sadly, so many are soaked in the muddied waters of mediocrity, willing to applaud and defend the government in the open glare of colossal failings. Most worrying is the well travelled and educated elite who are now either the purveyors, enablers or chief defenders of mediocrity. Ghana is the only country where so called leaders are endlessly praised and celebrated for doing less than 15% of their job even when the 15% is mostly of doubtful quality. This trend is evident across Ghana as governments construct several substandard roads, erect some cranky boreholes in a few communities and get treated to dance troupes and praise singers for failing in his job. Same goes for the Members of Parliament who are toasted and celebrated for patching up a few spots in some badly damaged asphalt roads that continues to kill thousands of victims annually.

Every year endless hypes and noise is made  about the purported achievement of government; how things are improving; how this and that president is ‘performing,’  but beneath all that deceit  propaganda is the reality of failure across all strata of  governance in Ghana. Neither the President nor any of the Ministers are successful.  None of them can pass even the most basic test of good governance and accountability. Government in this time is all about scamming and mediocrity. They loot public funds, deceive the public with some mediocre projects and together with a mediocre populace celebrate their failings as success.

In the era of unprecedented technology and attendant possibilities, the nation has gone back in time.  As a consequence of mediocrity and corruption, there is no remarkable development anywhere in Ghana in spite of a sustained oil boom and consequent availability of financial resources.  After more than Twenty Eights years of democracy, the nation is littered with bad roads. There is no pipe borne water, no electricity, no functional hospitals, no functional refineries, no functional steel plants, no functional public schools, no national airline, no social housing, no social welfare, no skills and vocational training centers, no functional railways, no waterways, no modern port facilities. The tragedy of Ghana’s leadership failure is further appreciated when we ponder the irony of a nation that is producing crude oil in the world yet imports fuel for local consumption because the refineries are dysfunctional.

Patchiness and its twin of corruption have ensured that there is increasing poverty, unemployment and massive infrastructure deficit at a time the nation is awash with petro-dollars.  It has consigned the president and Ministers   to mediocre projects while ignoring major and massive infrastructural projects that would build capacity for industrial growth and social investments that will insulate the citizenry from poverty and destitution. A country  with the resources,  population and size of Ghana should have a modern rail system with high speed   trains ferrying goods and persons across the nation, state of the art feeder roads in excess of six lanes, inland waterways and state of the art river ports, modern  steel plants and refineries, a  comprehensive  and free high quality  medical system,  twenty four hour uninterrupted electricity,  pure and clean pipe borne water, special economic zones  and cluster industrial parks, basic social security and safety net, job and  vocational training centers  amongst other basic social services and infrastructure that  are  indispensable  attributes  of any  functional nation.

Notwithstanding the mechanics of state failure, all too present in Ghana, the justifiers and enablers of mediocrity are everywhere singing praises of government for non performance and giving endless excuses why the much desired basic infrastructure and social services does not exist. A nation where so many are ever too willing to defend visionless and underperforming governments cannot succeed. At a time when so many ambitious and progressive nations around the world are blazing an audacious trail in economic, infrastructural and social development, Ghana is behind in time. A dirty, stumbling, un-ambitious giant of failure consigned to the ignoble depths of penury.

It must be borne in mind that successful societies are constructed through the continuous social pressure put on the leadership by a citizenry disposed to holding their leaders accountable. The choice is clear, it is either we emancipate ourselves from the veneration of mediocrity, and put our leaders under enormous pressure to fulfill our aspirations for economic, social and infrastructural development or continue with mediocrity and be consumed by the social violence of a failed dysfunctional nation.

Hope At Last for Menzgold Clients 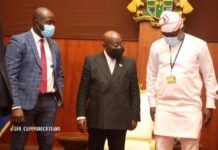