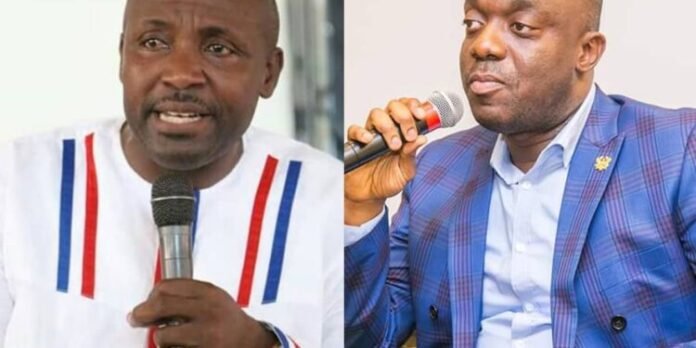 Justin Kodua Frimpong’s appointment as the Chief Executive Officer of the Youth Employment Agency (YEA), is likely to be aborted if he dares proceeds with his plans to contest the current General Secretary of the New Patriotic Party (NPP) John Boadu in the forthcoming National Delegates Congress to elect National Officers.

According to MyNewsGh.com report, Justin Kodua, the ‘Okumkom’ Campaigner has been directed to choose between his CEO post and his General Secretary ambition and communicate same to the appointing authority within this week or be sacked.

It is not clear if Mr. Kodua will yield to pressure to subordinate his interest to battle Mr. John Boadu.

He is reported to have declined comment on the subject when reached, but close associates revealed that it is top on their agenda for high-level discussions on whether to rescind his decision to contest or not.

“Kodua has up to the end of this week to decide to contest or not to. If he will go ahead to contest, he may lose his position as CEO of YEA because he has received warnings from powerful persons within government to settle for one”, a source revealed under the condition of strict anonymity to this portal.

Meanwhile, Mr. John Boadu has disclosed that Lawyer Justin Kodua cannot defeat him at the contest stating “I’m confident of retaining my post”

“I am confident I will retain my post considering what I have done beyond reasonable doubts. There is an agenda we are pursuing and optimistic of success. When we get there, we will separate the boys from the men”, he disclosed on Kumasi-based Hello Fm.