Speaking on Banking Crisis in Ghana, l personally has some observations about the current happenings, without any fear or favour. The truth of almost everything in Ghana is being ignored and the cabal of unwarranted activities deliberately aggravate issues unnecessarily. The entire nation and its citizenry get hurt in response, thereby drawing bleak future for posterity. The Ghanaian banking sector, probably, is most not headline-worthy observation, it is not the sector for which it deserves to be a pride for the business community to think of. Prospective investors have now discarded their interests in doing investments at the financial sector and have resorted to massive scramble for hard currencies, especially the US dollar. This has triggered the depreciation of the Ghana cedi. Therefore, the consequences of the failure of Ghana’s Financial Sector has a rippling effect on the entire economy.

A prospective and patriotic businessman narrated his ordeal to me and I remained voiceless and speechless, since it connoted criminal intentions. The facts of this ordeal are that, he instructed his Relationship Manager of a Savings and Loans Company to draw a Payment Order (PO) for GRA to enable him to clear his goods from the Port. The PO was duly prepared and deposited into GRA’s Bank Account. This financial institution debited the businessman’s account with the financial institution the face value of the PO and afterwards, he cleared his goods. Later, he was notified that the PO has returned unpaid, meanwhile the Savings and Loans had already debited his account with the face value of the PO. So, who should be held liable? Is it the businessman or the Savings and Loans Company? The government has been deprived of revenue meant for socioeconomic development. All the perpetrators of these crimes walk chest out with impunity.

My hammer of truth sees how the banking sector has paralyzed Ghana’s economic life and business environment. Arguably, Ghana’s economy is now cash-strapped. Businesses are crying, workers are weeping and the vulnerable are also wailing uncontrollably for survival.

Having the effrontery to discuss the egregious banking sector which prompted the complete business metamorphosis of five (5) banks into the newly born Consolidated Bank Ghana (CBG), my observations are heartfelt and insightful than the standard platitudes one finds in political rhetoric and the clergymen’s incessant defence of their associates caught in this scandalous web. If you are a spiritual person who uses theological dogma to amass wealth but have now exploited additional opportunity to join the cabal of unacceptable banking practices to make millions of Ghana cedis should be asked to pay the price for their misdeeds justifiably.

There was a supervisory failure, one that has worsened the Central Bank’s public image and contributed to its defeat in the hands of the staff of the defunct banks, depositors and all stakeholders. We should interrogate this; what necessitated the call for liquidity support of over Ghc600m to the Defunct Capital Bank, from the Central Bank? Which collateral or surety did they provide to merit that liquidity support? I don’t think a documentary or evidential support of any collateral was provided to the Central Bank, let alone perfecting to transfer it jointly into their names.

I am inspired by the total silence of this rot by Ghanaians. Instead of making incessant calls on those in authority to expedite action on their prosecution, these culprits have been left to enjoy their booty by acquiring properties in the Trasaacos, Airports, East-Legons and probably abroad, without any arrest and prosecutions. The Shareholders and Board of Directors of all the Defunct Banks should be immediately arrested and prosecuted, no matter one’s political coloration.

Their properties and saleable assets should also be attached to their respective Statement of Claims. One may ask, why should they be sued? The issue is simple. The Receivers of the Defunct Banks are now the acting owners. The various transactions identified and resulted in the Unlawful Loans, Unlawful Advances and Assets acquired by the shareholders are unlawful. Therefore, since their actions and inactions led to the tall list of indebtedness of these Banks, they ought to be sued jointly and severally at the Commercial Division of the High Court. It means that if judgements are given in their favour, the title to all the properties attached to the suits should be transferred to the Receivers and sold to defray the Banks indebtedness. This is a perfect direction, however what is happening and what are we seeing? We should be consistently consistent in our policy directions in this country. Or that, the authorities are comfortable in the waters of the Consolidated Bank Ghana (CBG), due to perhaps strong geographical and political breeze coupled with intermittent tidal waves, they cannot be prosecuted.

Another interesting scenery emerged. Some clergymen joined to rally support for Dr. Mensah Otabil but such support frayed at the edges. Running out of freak of fate, certain Ghanaian personalities have lambasted these clergymen to our taste. Their religious fate is incommensurable with reneging on business policies. In religion, sins can be forgiven but in an extremely controllable business, illegality is illegality. Offenders should face the full rigors of the Nation’s laws, without discrimination.

Dr. Otabil affirmed that, he didn’t have any banking training, but he was a Board Chairman of a Bank. He admitted that he was intimidated the first time by those with banking and finance qualifications but his quest to know more about banking is simply knowing where money is coming from and where it is going. Otabil further stressed that, track the money and in Finance you don’t need any mathematics, just know additions and subtractions. Meanwhile, in Finance, prudent working capital management is the backbone of the business and this cannot be practiced without the almighty Baumol and Miller-Orr Cash Management Models. These models are mathematical but out of ignorance, Otabil tried brainwashing his congregants that Finance is simply addition and subtraction. Can you imagine all these pronouncements coming from some people’s “Man of God”? It’s quite regrettable and unfortunate. A Board Chairman who supervised the disbursement of over Ghc600m, turned back in awesome to tell Ghanaians that he was just a Non-Executive Chairman, forgetting all the talks in his numerous sermons he delivered behind his pulpit. This is unacceptable and unforgivable in institutional corporate governance.

I find myself deeply enthused to hear sounds like revelry on the part of political colorations against the flopped banking sector.

Every single person involved in this scandal should never be spared in the sense that, the untimely introduction of luxurious vehicle’s levy has unfortunately punched me mercilessly with no clemency, why? Certain cabal of servility, considering their smartness, have unduly endowed Ghana with unprecedented criminal banking deals which have necessitated the coughing out of billions of Ghana cedis to revamp the banking sector. Any fraudulent act perpetuated by any person to obtain funds from any bank in a manner inconsistent with banking practice in Ghana should be arrested and prosecuted. Total silence on this matter has contributed to the tricky springing up of Womensgold, Mensdiamond, Chinese Bauxite, Children’s Manganese, Ada Salt et cetera et cetera.

I recently heard the cry of delay in the payment of interests and refund of investors principals by several asset management companies in Ghana. Little by little the time bomb is in giddiness to explode with a premonition of disaster.

Now, in a sophisticated environment however, it is well known that to succeed in robbing Ghanaians of their money, don’t indulge in either armed or iron robbery. Just device a cunning business which attracts higher returns in the eyes of prospective depositors, plying in between deposits acceptance and derivatives, a host of vulnerable would quickly participate, to pave way for the accomplishment of your secret agenda. Afterwards, dine with the politicians for political colorations, no matter the political divide. This unfettered free way of making money is deemed to exist at the blind side of the laws in Ghana. The planners and winners of these businesses are not treated like bank robbers who wield guns and offensive weapons to violently seize funds from a Bank.

It is therefore important to debunk the conventional thought that armed or iron robbers are those who use arms and iron bars in their hands and wear masks in their faces and threaten violence to humanity in order to steal money from them.

To the best of my judgement, actual robbers include Bank’s Shareholders, Board Members, CEO’s and entire management in cahoots with their criminal conspirators at the Central Bank. We see these people owning the tall towers and expensive cars with complex specifications, under the pretext that they have been blessed. Find these set of cabals in their air-conditioned homes dining comfortably with impunity.

To conclude, as suggested by Dr. Otabil, until the laws in Ghana start biting, this menace is on the verge of increasing at an increasing rate. The government should order the arrest and prosecution of these three (3) sets of cabals of criminal gangs:

(I) All Bank of Ghana Staff who granted the Defunct Capital Bank a liquidity support of over Ghc600m.

(Il) The Partners, Relevant Managers and Audit Supervisors of the Audit Firms of the Defunct Banks.

(Ill) Shareholders, Board Members and Management Members of the Defunct Banks.

Thank you for your attention. 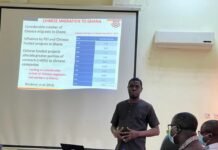 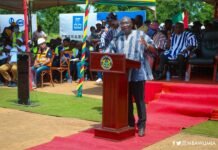