As a further demonstration of government commitment towards delivering on the strategic digital economy agenda, Francis Ejaku Donkoh, a former Central Regional Youth Organizer of the New Patriotic Party (NPP) has charged the party to remain focused in delivering on the mandate of Ghanaians and do away with the detraction with current happenings.

“Ghanaians have renewed the mandate of the NPP in the 2020 elections with the outcome we had. But it seems certain issues are taking away our focus instead of remaining resolute on what we are expected to deliver,” he said.

Despite the mandate given to the NPP by Ghanaians to continue with the governance of the country, the party seems to be having a divided attention regarding issues which bother on the aftermath of the election of the speaker of parliament among others.

This is what has prompted Francis Ejaku Donkoh, the vibrant, charismatic and dynamic former NPP Organizer aspirant in the Central Region to remind the party that Ghanaians are expecting the NPP to deliver on their mandate so they shouldn’t be detracted by certain happenings.

In a chit chat with Amansan Krakye of Kastle FM fame, Francis Ejaku Donkoh said issues which came from some Members of Parliament losing their seats and the defeat in the Speakership contest shouldn’t detract the party.

“It’s true there are issues with how the party lost some parliamentary seats, the issue with the defeat we had with the speaker of parliament contest and so on. But we should remain focused on the mandate given to the NPP by Ghanaians.” 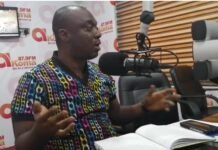