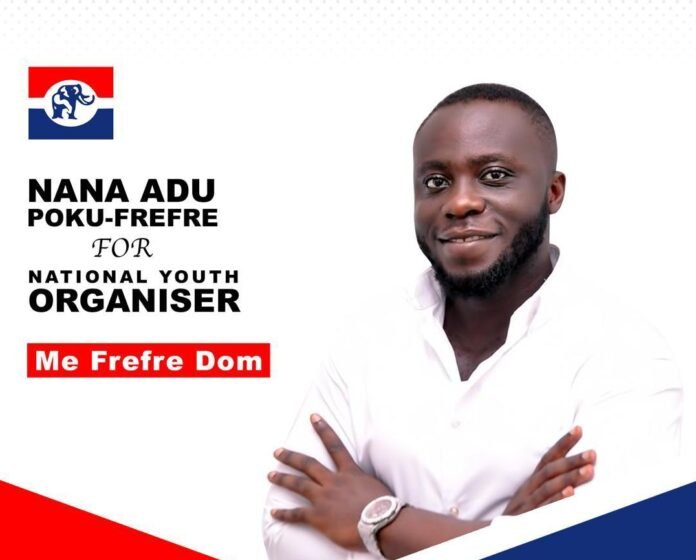 With the dust barely settled, and the internal elections timetable of the New Patriotic Party (NPP) officially out, the founder of Loyal Men of NPP Nana Adu Poku Frefre has come forward to stake his claims for the National Youth Organizer position.

The new entrant is the Director of Communications of the Scotland Chapter of the party, Nana Poku Frefre, affectionately known as Frefre, whose high-spirited supporters have stated that, they are poised to win the contest to provide the exemplary leadership needed to connect with the grassroots level, and galvanize massive support for the party to break the 8-year jinx come 2024.

The first four to declare are the former Deputy National Youth Organiser of the party, Salam Mustapha, the Ahafo Regional Organiser, Michael Osei Boateng, the aide of the party’s General Secretary, NPP Abanga and the Deputy Youth Organizer of NPP USA, Prince Kamal-Gumah.

In an interview, supporters of Nana Poku Frefre shared their thoughts including his political experience and vision for the party, and why they think he is the best suited and preferred candidate to occupy the National Youth Organizer seat.

They explained that when given the mandate to lead the youth of the party, he would provide a strong party leadership at the youth level which was needed to plan and execute the party’s activities on the ground more effectively. They delved into his organizational ability, and outlined a campaign strategy code-named, “Frefre Dom”, a wordplay with varied interpretations which include mobilization, attracting and commanding huge, and of course, a tag identity of the supporters of Frefre’s campaign.

They explained that the “Frefre Dom” agenda pushers are deployed and found at all the constituencies in the country for effective Organization, where their campaign message is to be carried to the NPP foot-soldiers and supporters even before Frefre himself hits the grounds.

“We need the right party leadership to effectively lead the youth, engage and coordinate operations as required,” they stated, adding: “we need to seize the opportunity to reach out to our NPP sympathizers, particularly the disgruntled ones and bring them on board by addressing their concerns”, one ally of Frefre asserted.

They noted that, to break the 8, the party would need a Youth leader who has the charisma and ability to mobilize the supporters and sympathizers with superior strategy. As the National Youth Organizer, Frefre would work to achieve massive grassroots mobilization to a level never experienced before in the party circles.

“As a grassroots person, he has the requisite grassroots temperament and experience to address the grassroots problems facing the NPP”, another ally stated.

Touting both his political and academic credentials as the most credible person to occupy the National Youth Organizer position of the NPP, the “Frefre Dom” supporters said he has served and continue to serve the party at various levels at the grassroots including being one of the pioneers to take advantage of the new media or social media, as a tool of mobilization for outreach campaign programmes across the country for the party. They went on to add that, as a typical grassroots mobilizer, he is always organizing outreach campaign programmes at the hinterlands and even in public transport, with the aim of projecting the message, candidates and positives of the NPP to the average Ghanaian.

Nana Poku Frefre has an immense leadership acumen that traces back to his students’ politics and activism days, which include a Students Representative Council (SRC) General Secretary and later, SRC President, of the Institute of Management Studies. He was also a leading and influential member of the National Union of Ghana Students (NUGS) and Ghana Union of Professional Students (GUPS) between the years 2006 and 2010.

At mainstream politics, he has served and worked as aide to National Officers and leading members of the NPP. He is currently the Director of Communications of the NPP North of Scotland Chapter, which he is a founding member of. He is also the Deputy Director of Networking at the Ashanti Regional Youth Wing of the party, and was as well, a member of the Elections 2020 Campaign Team of the Ashanti Region.

His supporters therefore added, “If the NPP is looking to raise its stock, so to speak, and break the 8, it should be quick to choose this man as its National Youth Organizer. The profile of Nana Poku Frefre fits the bill and the NPP has its man who will combine both professional expertise and political experience to carve and market the appropriate messages that would be gladly accepted by the average Ghanaian as he would bring his marketing skills to bear. Then his Human Resources Management skills would also be key because we would need a youth leader that can manage the mood and temperament of our vibrant young supporters as we go into elections 2024. Last but not least, his security background also indicates that, he is more than competent to come up with the right strategies needed to lead the youth as the leader of the wing.” the members concluded.

Basically, his supporters believe he is the best person to lead the youth of the party as he has served and continues to serve at the grassroots, local and community level, to the regional, the diaspora and now the national stage. They believe his experience, spanning all the various hierarchies of the party structure, has given him a firm grasp of the party’s essence, ethos and workings thus making him a formidable candidate. They are confident that Nana Poku Frefre has the expertise, the know-how and the experience to mobilize the youth in order to solidify and cement the NPP’s presence on the ground and position the party as an unbeatable political machine capable of winning every election in the present-day political environment.