The worst type of coup d’état occurs when victims of oppression are tricked to think they live in a democracy. Such is the curious case of Ghana, since 2016.

Over the last four years, Ghanaians have witnessed a systematic rise in fascism with, state-organized attacks on democratic freedom have become a norm.

Akufo-Addo’s archaic 1970s style policies have cost the Ghanaian billions of dollars, without a corresponding reflection on their wellbeing. Instead of fixing these policies, they have chosen to beat the suffering masses into silence.

The days of military coups may be long gone, yet this power-hungry Akufu-Addo government continues to deploy political thugs and uniformed zombies to intimidate people.

We may have pushed back the culture of silence in the 1980s and 1990s, but it seems it was always a hidden agenda of Akufo-Addo and his NPP to bring it back.

If the state is not organizing the beat down of innocent Ghanaians, Akufo-Addo appointees are shooting at them, insulting them at every turn or shutting down their popular media outlets.

The time is right for the suffering masses to rise up and fight back against this insatiable thirst to curtail the freedoms of Ghanaians.

As long as this violent monster, with Akufo-Addo as its head, sits in the office of power and feeds on our taxes, the ordinary Ghanaian is not safe.

Now is the time to cut off the monster’s claws before our children become victims of our silence and refusal to fight back.

Enough with the harassment. In His Excellency President John Mahama and his running mate Professor Jone Naana Opoku Agyemang, Ghanaians are always assured of their freedoms, peace, and wellbeing.

In the December 2020 elections, you have a choice, to live under state-organized harassment and intimidation from NPP thugs, or to go for a team you can trust – His Excellency President John Mahama and Professor Jone Naana Opoku Agyemang. 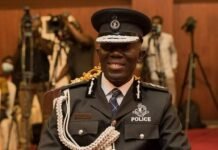