According to theghanareport.com’s Political Desk,  over 125 official reports of proceedings in Parliament (Hansard) in 2019 to bring you data on the performance of MPs on the floor of the house.

It is near impossible to track the work of MPs during committee sittings. The research does, however, track the number of questions, statements, and contributions made on the floor where final decisions and approvals and debates are settled.

The research also excludes leadership of the house as by their position they are often given more opportunities to contribute.

The research, in some cases, also offers explanations on why an MP may have contributed more or less. The political desk counted questions, comments(contributions), and statements made on the floor.

Theghanareport.com is grateful to Parliament for making the Hansard and other important information available on its website and taking steps to regularly update it.

In responding to the growing public interest in this list, theghanareport.com will be adding 10 more MPs shortly to bring the total to 20.

The NPP MP spoke 848 times in 2019 and delivered two statements in Parliament.

The high frequency of his contributions can be generally attributed to his position as chairperson of Constitutional, Legal and Parliamentary Affairs (CLPA)Committee.  He is also the chairperson of the Judicial Committee.

In an example of how his position as chair helps push up his contributions, he led the discussions on the floor in January 2019 when the Right to Information Bill was being discussed after his CLPA committee studied the bill.

The legal practitioner entered parliament in 2009 and has been re-elected twice.

Parliament is closely involved in two things in Ghana – legal and money matters and with Ben Abdallah Banda contributing more on legal matters it would explain why our next most vocal MP is an economist.

The NPP MP functioned in Parliament basically as the Finance Ministry’s representative. As the Finance Committee chair, he was in the thick of affairs moving and second motions on the floor. He played this role with deputy Finance Minister Abena Asare as the two were frequently reported in the Hansard, working together in Parliament. Every bill on the economy passed through him. He made 653 comments, presented two statements, and asked 45 questions.

Dr. Assibey-Yeboah has been in Parliament since 2013 after previously working at GIMPA and the Bank of Ghana.

The minister under the Mahama administration found a lot of time for Parliament in 2019. He made a total of 423 contributions on the floor, the most made by an NDC MP. But he will not be in the next parliament as he lost to Peter Turbo in the NDC primaries in August 2019. He has been in the House since 2005 and is a member of three committees. The huge difference between the third most vocal and the second or first could give an idea about how positions in Parliament could influence output.

A.B Fuseini known by many as a man of proverbs has been in Parliament since 2013. The former editor at Graphic Communications Group spends a lot of time rolling off proverbs. He is the second most vocal MP on the opposition bench.

When the minister of state for Monitoring and Evaluation is not monitoring the performance of the government, he is often in Parliament making contributions. The Howard university-trained economist has been in parliament since 2005.

The Adaklu NDC MP made 232 comments and filed five questions plus five statements on the floor of parliament. For example on March 13, 2019 he asked the Minister for Finance whether the introduction of the ‘Paperless Port’ has increased the cost of doing business at the ports.

He has been in parliament since 2012. Winning a re-election bid in 2016. The architect is the ranking member on the Roads and Transport Committee and Members Holding Offices of Profit committee.

He holds the joint 6th most vocal MP along with Kwame Agbodza. He was heard on March 2, 2019, making a statement on Hepatitis B. He chairs the Communication Committee and is a member of the Finance committee.

The one-time deputy Food and Agriculture Minister is a second-term MP, taking his seat for the first time in 2013 and winning re-election in 2016. He is the chairperson of the Education Committee of Parliament, according to Parliament’s website.

The NPP MP who is also Board Chair of the Ghana Water Company was involved in discussions on the floor of Parliament in months such as December, October, July, June, April, and March. He is a member of the Public Accounts Committee and the Defence and Interior Committee. He has been in Parliament since 2013.

The legal practitioner first made it to parliament in 2013. In his second term, he has made it in the final slot for the 10 most vocal MPs on the floor of Parliament. He is the Vice-Chair of the Subsidiary Legislation Committee and is also a member of the Judiciary and Education Committees. 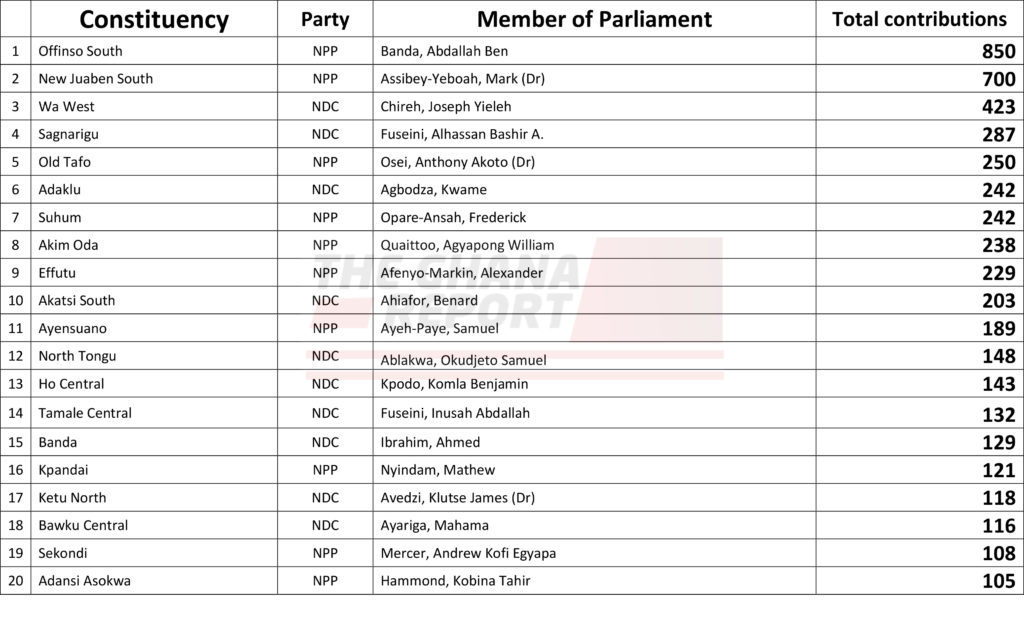 Theghanareport.com is serializing the performance of MPs on the floor of the chamber. Watch out for the next episode on the top 10 most silent MPs and the most vocal debutants, plus research on the contributions of female MPs.

‘Akufo-Addo want to kill Us’ – Joycelyn Cries Out, raises alarm...