Contrary to the pledge by the then flagbearer, Nana Akufo-Addo to fix the economy of Ghana in eighteen months after he is elected as president, the General Secretary of governing New Patriotic Party (NPP), John Boadu, is appealing  to Ghanainas to give President Akufo-Addo and the NPP government forty-years to deliver on their campaign promises.

According to John, the party has plans that will transform Ghana – He argued that times are hard because Ghanaians opted for the National Democratic Congress (NDC) after a grandeur output by President John Kuffuor.

Speaking on Peace FM’s flagship (Kokrokoo) on Thursday, September 20, 2018, he explained that the party needed 40 years to transform the country. According to him, the Akufo-Addo led government is rolling out several socio-economic initiatives to enhance the development of the country.

‘The planned transformation agenda will remain on paper if the party’s mandate isn’t extended for a long time’, John Boadu noted

In his opinion, Ghanaians are facing lots of hardships because the citizenry didn’t give the mandate to President Nana Akufo-Addo and the NPP in 2008, after ex-president John Agyekum Kufour.

To Mr. Boadu, voting the National Democratic Congress into government after the good works of the Kufour government laid for Ghanaians, the genesis of the economic challenges confronting the nation.

To avert the calamity, Ghanaians will have to keep NPP in power for over 40 years to be able to bring Ghana to a point where everyone will be happy. 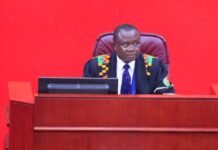 ‘NPP MANIFESTO CAPSULES’ – ACCESS TO UNIVERSITIES AND GHANA SCHOOL of...