Former Director of Communications of the New Patriotic Party (NPP), Yaw Adomako Baafi has shot down claims by a section of the public that the country is in turbulent economic crises. Though admitting things are not perfect, he believes Ghanaians today are in Heaven compared to the Mahama era.

He seeks to suggest that Ghana in its present form is equated to ‘heaven on earth’ with pro-poor policies being implemented to ameliorate the suffering the masses witnessed under the erstwhile John Dramani Mahama administration.

According to him, the implementation of the Free Senior High School (SHS) Policy, as well as the double track system, are all laudable initiatives providing reliefs for parents who hitherto could not afford the sky-rocking school fees of their wards.

He was heard on Accra-based Neat FM in defense of government saying “Today, the poor woman in the village who could not afford school fees for her children is happy because of free SHS. Today those in the village are gaining admission to some brilliant schools in the cities because of this double-tracking system. Where is the hardship comparing to NDC’s era?”

Touting achievements of the government further, Yaw Adomako Baafi said “Which hardship surpasses the ‘Dumsor Dumsor’ during the NDC time? Yes, things are a bit hard now but there’s no extreme hardship in Ghana as the NDC is saying.

On the recent fuel price hikes, he admitted the development is worrying but said it is far better than was witnessed under the opposition National Democratic Congress (NDC)

“It is worrying but what would the NDC have done if they were to be in power? The situation of fuel hike is not controlled here. They messed up with the economy and that is the price we are paying now.” He intimated.

You Are Not Fit to Lead NPP, Baah to Alan 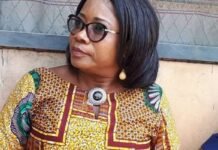