Mr. Goosie Tanoh, one of the NDC flagbearer hopeful is expected to ambit his completed nomination forms today, Tuesday, December 18, 2018 at the party Headquarters at Adabraka in Accra.

Goosie  Tanoh os also expected to come along with his Ghc 300, 000.00 instead of the earlier  Ghc 400,000.00 filing fee, to show his readiness to battle anybody for the vacant flag-bearership position of the opposition NDC.

The NDC through its general secretary Johnson Asiedu Nketiah, eaelier announced in the election guidelines an amount of Ghc 400,000; this raise lots of agitations by a section of the presidential aspirants and petitioned the party’s Council of Elders who directed that the fee was reduced by Ghc 100, 000.

Reports making rounds from the GOOSIE2020 camp indicates that while they believe there are still a number of issue outstanding, they are going ahead to file the nomination barring any direction from the party’s Council of Elders or NEC.

Goosie Tanoh is currently on a campaign tour to the Western region and he would be addressing members and supporters of the NDC in a video ad to be released Tuesday after submission of his forms by his campaign team. 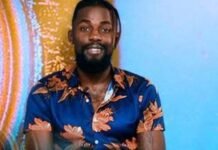