Firebrand politician and CEO of GIHOC Distilleries Ltd. Maxwell Kofi Jumah has revealed that his Ghanaian wife divorced him not because he was caught cheating but for accepting to serve his country in the capacity as CEO of the Kumasi Metropolitan Assembly (KMA).

According to the former Member of Parliament for Asokwa, his wife of 20 years with whom she stayed in the US for several years could not understand why he took up the job which she described as a “crazy job.”

“She felt being a Mayor was a crazy job, she left me because I was a Mayor. She came in and saw what I was doing and said this is crazy, I’m leaving whenever you get over with this Mayor stuff come back and marry me. That’s what she said. At first, I thought she was joking but later I realize she meant it,” Mr. Jumah disclosed in an interview with Bola Ray on Starr Chat on Starr FM.

Asked if he has any regrets after his wife with whom he has five children divorced him, the former Deputy Minister of Local Government responded: “I’m enjoying myself, I’m free…If you are broke then you worry about who’s going to wash your clothes. You can use your washing machine, you have somebody to clean your house…there are also good restaurants around so why should I worry,” he asked?

Maxwell Kofi Jumah who holds an MBA in Finance and Marketing from the Rutgers University (USA) was appointed as the Mayor of Kumasi, the Ashanti Regional Capital by then-President J.A Kufuor in his first term from 2001 to 2004.

Prior to that, he was Lecturing at a University in the United States of America.

Be Bold in Your Stance on Matters holding Ghana back, Faith... 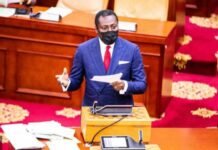 THE CONSTITUTION OF GHANA, MY UNION AND ME