Teteete Nii Owuo IV, who was announced the successor of the late Nii Okwei Kinka Dowuona VI is assuming the prestigious throne of his ancestors.

Teteete Nii Nortey Owuo IV has successfully received the staff as the Osu Mantse from the Owuo We Royal family against the evil plots and influences of certain elements in government.

Until his appointment, Nicholas Nortey Owuo was the Assistant Chief Technician Engineer (Civil) at the Ghana Highway Authority.

His coronation ceremony was led by Dzaasetse Nii Saban Atsen VII and the Head of family of Owuo We Royal house Mr Edward Nortey Noi.

Nicholas is an Old Boy of Mfantsipim High School, a holder of HND in Civil Engineering from Takoradi Polytechnic, and a graduate of Civil Engineering of the KAAF University College, an affiliate of famous Kwame Nkrumah University of Science and Technology, KNUST, Kumasi.

Nii Okwei Kinka DouonaVI answered the call of his ancestors at the dawn of Saturday 06 February, 2021.

He was 57-years-old, the Paramount Chief of Osu and, President of the Osu Traditional Council.

He was first elected President of the Greater Accra Regional House of Chiefs in 2016 and later re-elected for another term in 2020. He was enstooled as the Osu Mantse in 2007.

He was born and named as Michael Dowuona-Owoo on November 7, 1963 at Adabraka in Accra to Nii Dowuona from Dowuona We of Osu Kinkawe and Madam Grace from the Wellington family of Osu Alata. 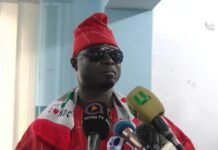 ‘We Will Beat, Expose You’