Though a High Court in Accra on Thursday 17th February 2022 ordered the Police Administration to protect and assist the Osu Kinka We Dzasetse and Elders and Councilors of the Osu Stool to perform the final funeral rites of the late Chief of Osu, Nii Okwei Kinka Dowuona VI, there are concerns about the law enforcement agency’s commitment to heed the court order.

According to the Order under the hand of His Lordship William Boampong, and seal of the High Court of Justice (General Jurisdiction), the Police should provide protection and assistance for the celebration of the laying in state and the final funeral rites of the late Paramount Chief of Osu Traditional Area and President of the Greater Accra House of Chiefs.

He further ordered the Police to call on the Military and other Security Agencies if the duty becomes beyond the Police.

The respondents in the case were Nii Nortey Adumuah IV and David Lantei Odartey, styling himself as Nii Odartey SRO III, according court documents.

However, there are concerns that the Greater Accra Regional Command of the Police Service is making it difficult for the Service to provide the necessary protection as directed by the Court.

Impeachable sources say the Director General of Operation has since directed the Greater Accra Regional Commander, DCOP Mr. Iddi Lansah Seidu to handle the operation, but the Regional Commander on his own, is requesting to meet parties in the suit on Tuesday 22nd February 2022 delaying the process.

Reinforcing this report, DCOP Iddi Lansah Seidu on Sunday 20th February wrote a letter to Nii Saban Atsen VII, Osu Kinka We Dzaastse acknowledging the Court Order, and deferring action to the directive of the Inspector General of Police.

“…the Inspector General of Police would be officially informed on Monday, 21/02/2022 for his directives,” the letter read in part.

We at The Hawk find it strange that an Order of from a Court of competent jurisdiction that clearly dictates what to be done should be subjected to the directive(s) of the Inspector General of Police.

For us, the conduct of DCOP Lansah may not only lead to the subverting of the instructions of his superiors but also raises questions about professionalism.

Some sources have suggested that the delay in executing the Court Order is a calculated scheme to afford the respondents opportunity file counter suit(s) ahead of the final funeral.

The burial of late DF Okwei Kinka Dowuona VI is slated for next weekend but the Osu Mantse Palace is still in a mess and unkept.

Meanwhile, some important final rites were supposed to have been performed during the weekend to herald the rites of passage of the Chief.

Nii Kinka Dowuona death was reported on February 5, 2021 after a short illness.

The newly installed Osu Mantse, Teteete Nii Nortey Owuo IV will preside over the ancestral journey of his predecessor. 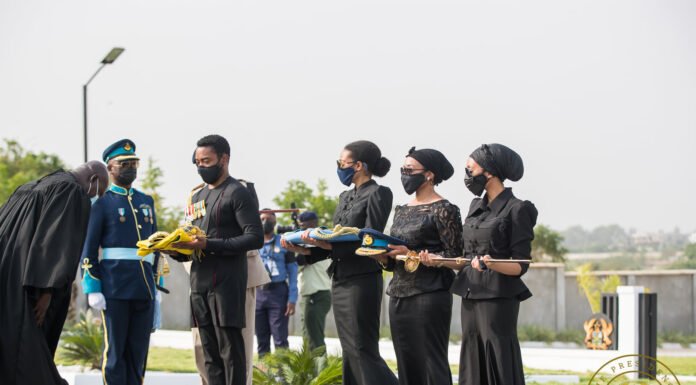