The opposition National Democratic Congress (NDC) says it totally rejects the decision of the Kumbungu Legislator, Ras Muburak to support the position of the governing New Patriotic Party (NPP) in the upcoming referendum slated for December 17.

The party says the decision by the Member of Parliament is insupportable, reprehensible and completely offensive.

Ras Mubarak is on record to have said, the arguments against the amendment of Article 55/3 of the Constitution are weak and unacceptable.

The amendment seeks to repeal the provision in the Constitution that bars political parties from elections at District Assemblies and lower government unit.

Director of Elections for the NDC, Elvis Afriyie Ankrah, insists any previous stance taken by a party member is null and void without effect.

Meanwhile, Minority Leader, Haruna Iddrisu has warned of sanctions for MPs who do not fall in line with the party’s position.

“I understand some members of Parliament (in the Minority) are not holding the line and they would be dealt with in accordance with party discipline,” he said.

This portal can report that the Lawmaker was invited to a disciplinary meeting at the party Head Office at Adabraka.

According to Mubarak, he has decided to allow his personal views be subsumed for the broader interest of the party.

Ras Muburak has in a press release rescinded his decision on backing a ‘YES’ campaign.

Below is the release by Ras Mubarak!

Upon a sober reflection and advice from very distinguished senior party members, especially the Parliamentary leadership, I have concluded that it is improper to deviate from my party’s official position for a NO vote in the upcoming referendum on article 55(3) of constitution.

I recognize that my personal position must be subsumed under the broader interest of the party.

I have therefore decided to uphold the party’s position for a NO vote on the matter. 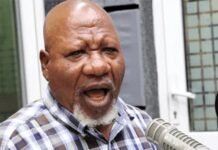