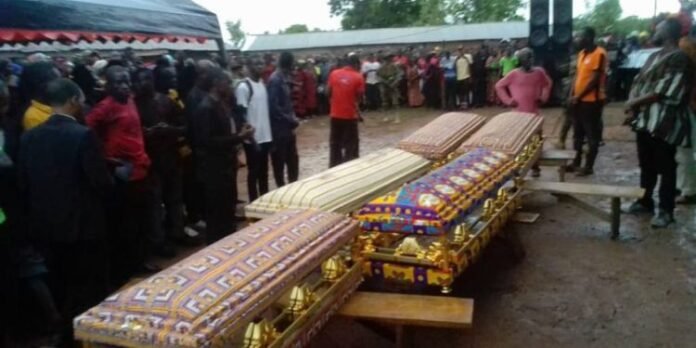 The remains of the six students who died in the car crash of Wednesday 11 May, 2022 while returning from school have been finally laid to rest.

The deceased were buried at the given a mass burial at Ankaase in the Krachi West District of the Oti Region amidst tears from families and other sympathizers.

The Hawk gathered that the deceased are all girls, four of them siblings. Of the other two, one is a cousin to the four, and the other a co-tenant.

We learnt that two people including the mother of the four girls fainted while the burial proceedings were ongoing.

Seven of them were knocked down and killing six instantly at Ankaase in the Krachi West District after a boozy driver rammed his Toyota with registration number GR-2392-22 into them, with the seventh one severely injured.

The sole survivor is currently in critical condition and has been transferred to the Tamale Teaching hospital for treatment.

At the mass burial service, residents converged to pay their last respects while others cried their hearts out.

The driver who knocked down and killed the children has been arrested by police in the area.

Meanwhile, the Member of Parliament for the area, Hellen Adwoa Ntoso, is blaming the ministry of Roads and Highways for playing blind to her letters urging them to erect speed ramps to control over speeding to avoid incident such as what has befallen her people.