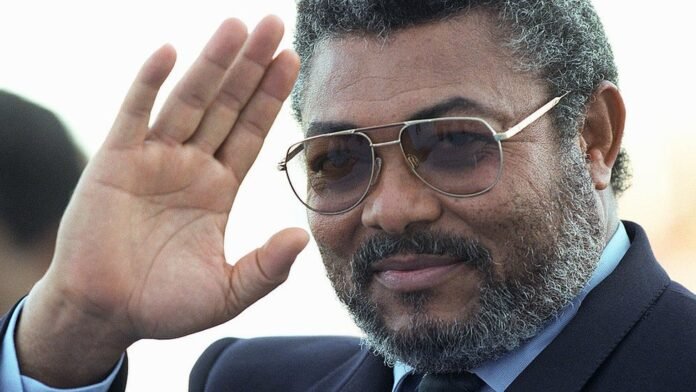 In a statement, Martin Amidu recalled his relationship with Rawlings, and cast him as a good host who provided him with shelter.

Read the details of Martin’s tribute……

I was taken aback on 29th September 2020 when after paying my condolences and expressing my experiential emotions of what a toll the passing of your dear mother could have had on you despite your old age, you told me that: “Chief, it is good it happened now. Chief you people never knew. Two or three years ago I was in bad shape with my health and I feared I would go before her. At least I can now see her off.” I thought this was just one of the usual conversations between friends.

With hindsight, I now realize that my dear and respected former PNDC Chairman and former President Emeritus Flt. Lt. Jerry John Rawlings was indeed giving us notice of his impending exit from his earthly assignments after the burial of his dear mother and bidding us goodbye.

After the interment of his dear mother on 24th October 2020 he was compelled by affairs of state to truncate his period of rest to hold a series of mediation sessions with me, then the Special Prosecutor, in his Office in Accra on 27th, 28th, and 29th October 2020.

The late former President Emeritus Rawlings adjourned the first session to the next day, the 28th and promised we would have lunch together. He kept his word and invited us to have lunch with him, adding that: “Chief” referring to me, “If you do not eat this lunch, I have arranged for us I will not be happy”.

I reluctantly, unmasked and helped myself to lunch with the Great Leader. Others were around for the lunch including his sister Mrs. Judy John Nkansah. With hindsight, was this also in the nature of the last lunch/supper you had arranged in anticipation of your impending ancestral journey? We saw each other in his office briefly the next day, the 29th and he was all hope and assurance that justice and equity for the Ghana was going to result from his mediation efforts on the 30th, the next day.

We could not meet in a face-to-face interaction again because contrary to our agreed expectations I had been compelled to execute one of the teachings of our revolutionary struggle – positive defiance without having warned him about my intentions to avoid any breakdown in any prospect of continuing mediation. I was not exhibiting the skills of being good at playing chess, as I am told you surmised, Comrade Rawlings. I was dead serious to be a loyal, faithful, and true revolutionary comrade serving the interest of the ordinary people of this country for whom you led us to render selfless service during our long years together as comrades and brothers.

I heard the news of your admission at the Korle Bu Teaching Hospital on 4th November 2020. Then on the morning of 12th November 2020 somehow and intuitively, I got apprehensive and tried to find out how well you were doing. The prognosis was not gloomy. Then at 10:15 am I received by telephone the shocking and sad news that Ghanaians were yet to hear, from the United Kingdom, while I was in a scheduled meeting in my then Office. My mobile phones started ringing. “Is what I am hearing about former President Rawlings death true? Is it true….? Is it true…?”. My pretense of appearing self-composed despite the shocking and saddening news of your sudden demise to our ancestors could no longer continue during the meeting. I still cannot believe that you have left us, your comrades, so suddenly and put the whole nation in shock and despair.

The handing over of power by an African leader after two four-year terms under a Constitutional regime in Africa which you accomplished is a notable event in the political history of Ghana and Africa. Not all who have been Presidents or Heads of State have been of equal merit, or of at least equal importance. Presidents or Heads of State, like other men, vary in their importance on their generations and history. Some even in their lifetime never raised a ripple on the surface of politics and whose names are now forgotten by all but students of their period. Comrade Rawlings, you are one of those rare gems of this land who will never pass from the minds of men, but will live in their hearts, so long as Ghana endures because of the great qualities of your life.

These days they have difficulty.

‘We’ve been praying for Koku’ – Bobie-Ansah