Two candidates out of three in the National Union of Ghana Students’ presidential election have claimed victory.

A former Press and Information Secretary of the Ghana Union of Professional Students (GUPS), Kwesi Atuahene, has posted on his timeline on facebook that he validly elected as the President of the National Union of Ghana Students (NUGS) 56th Annual Congress at the GNAT Village in Ejisu Abankrom.

About an hour later, Dennis Appiah Larbi-Ampofo also addressed the media and claiming estimates showed he had received the support and mandate from members of the Union to steer the affairs of the Union as next President.

Announcing his victory on social media (facebook), Atuahene wrote; ‘Thank you. My administration owe the Youth and Students of our nation the responsibility to ensure the right of the Ghanaian to be educated is protected. Humbly submitted, Kwesi Atuahene National President – Elect National Union of Ghana Students.

Ahead of final declaration by the Umpire, multimedia had published on its reputable news portal, myjoyonline.com that Kwesi Atuahene was the president elect under the screaming headline; ‘Kwesi Atuahene is NUGS President-elect; Francess Gifty Ennin wins Secretary position’.

Strangely, the report has since been pulled down without explanation.

Dennis  Appiah Larbi-Ampofo is alleging to have won the election by garnering 78.1 percent of the total votes cast as against Atuahene’s paltry 18.69 percent.

Meanwhile, the Chief Scribe of the Union, Julius Kwame Anthony, has doubted the credibility of the elections, impugning criminality, and suggesting the vote was skewed in favour of Dennis.

For him, based on the irregularities that have characterized the process, the outcome cannot be deemed as free, fair, transparent, and credible.

Anthony claimed, the role bestowed on him by the Union’s Constitution was violently usurped by his colleagues.  To him, the Constitution empowers only the General Secretary (him) in this instant case, the responsibility to compile the ‘Voter’s Register’ for elections at the Union’s Annual Congress.

He assets that this constitutional mandate was taken by some of his colleagues to generate the register without his knowledge.

In Anthony’s mind, it was part of calculated plot to skew the process in favour Dennis Appiah Larbi-Ampofo.

“The Constitution is clear on how elections are supposed to be conducted and who hands over members in good standing to Congress, and for that matter, members qualified to vote in the election. Now as we speak, the Voters Register or the list of members that was a concoction of someone’s imagination. He alleged.

But in a sharp contrast, the outgoing President, Emmanuel Boakye Yiadom, has contested the claims made by his General Secretary.

“I dare Julius Anthony to submit the pictures of the list to the media for confirmation. If any of the schools is not a member of the Union after the verification, then, we shall accept his claims’.

According to Boakye Yiadom, he (Anthony) joined the leadership queue to cast his ballot so he does not understand what he is alleging.

However, New Patriotic Party (NPP) and the National Democratic Congress (NDC) social media activists have spitted heads over the victor.  While, past, recent leaders of the Union perceived to be afficionados of the governing party are celebrating and congratulating Dennis Appiah Larbi-Ampofo as the legitimate president-elect, those on the side of the opposition NDC are equally erecting social media posts in solidarity with Kwesi Atuahene as legitimately elected president.

At least, Delegates and Contestants are well aware that the elections of NUGS Executives will not be won solely by votes or popular consensus. There are several other variables that influence election results.

These include the incumbent’s control of state security apparatuses, delegates structures, and control of institutions. 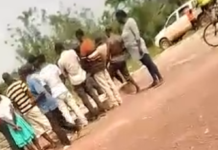